Last time we looked into the world of curtain poles and discovered that as beautiful as they are, they aren’t always suited to the job in hand. I promised you I had a solution, and today I am going to try to argue for it and delve into the world of tracks and tracked poles.

I think curtain tracks get a very bad name, and yes I admit they aren’t always the most attractive piece of kit to install in a home or office. Often, however, they aren’t really going to be seen much, or at all. In which case they should be your first port of call.

When I am talking about tracks, yes I mean those white metal or plastic tracks with gliders. Those things sometimes people buy at DIY stores and fit themselves. But I am not really meaning the awful plastic ones. The quality aluminium ones are the way to go for a few reasons

From a design point of view there are also exceptions to the rule and Silent Gliss’ 6840 is a smart curved track that to my mind looks pretty cool in many contemporary locations or for panoramic bi-fold doors reveals.

Because the tracks have gliders and not rings, the brackets fit either at the back or on the top of the track – this means you can have as many brackets as you require – great if the wall isn’t the best and you need to spread the load more evenly, which I find is sometimes the case above Victorian era bay windows, where the wall tends to be poorer quality, especially upstairs.

The good news is that my favourite curtain pole option is here to help. Tracked poles – I sometimes refer to them as hybrid poles – combine the best of tracks with the look of poles. There are many metal pole variants out there from Silent Gliss’s popular Metropoles, to the Evaglide and Distinction ranges from other suppliers. I regularly opt for The Bradley Collection’s Gliderpoles as they use high quality Silent Gliss internal components, but with Bradleys beautiful finishes and bracket options. Byron & Byron are our go to for wooden versions. 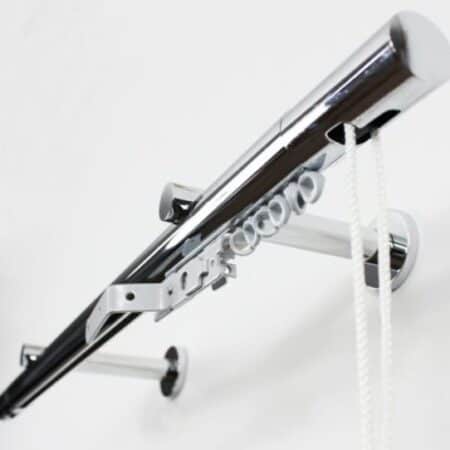 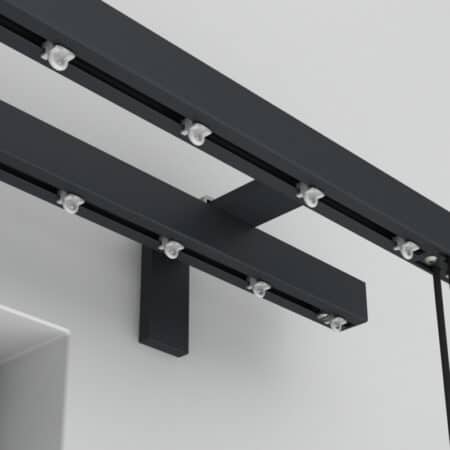 A tracked pole works just like a track with gliders and pretty much unlimited brackets. They can be corded as well as offering Wave headings for your curtains. Designed to offer the option of being hung directly from ceilings they can resolve problems around light bleeding in from above or where there is limited headroom.

Unlike tracks, they come within beautiful poles including for bays. Admittedly more expensive than tracks alone they are still sensibly priced and mean you can show off the pole as part of your design, without compromising the solution.

Then downside? Well, to me there aren’t many. For those of you who love the clacking of rings as the curtains draw back and forth, you’re going to miss out. You don’t have the same level of customisation as with some of the best wooden poles, especially where finials are concerned, but there are plenty of options available for most design briefs. For that very contemporary look, flush end stops are a great detail to offer perfect minimalism.

Tracked poles have been around a long time, so I’m not expecting you to wowed by this news, but I do urge you to have another look if they’re something you’ve steered clear of in the past.

To stay current on the fast-moving world of fabrics, and to hear from us whenever we publish something new, you can subscribe here.

What will I receive?

All sorts: creative inspiration, our thoughts on the industry, style forecasting, FAQs, and whatever else springs to mind when we finally find time to sit down and write. You won’t be bombarded with marketing and sales, and neither will you receive the same thing from month-to-month for the sake of it. That’s not our style.